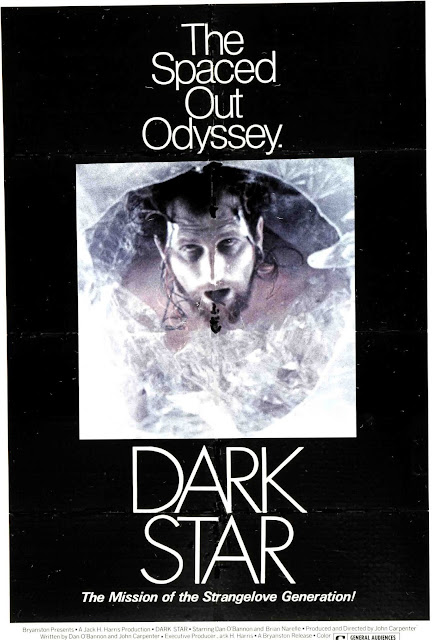 I received my copy of John Carpenter and Dan O’Bannon’s space story Dark Star (1974) from Amazon today, so it was movie night. John Carpenter and Dan O’Bannon worked together on this satirical science fiction film that originated from a student short film at USC. Producer of The Blob, Jack H. Harris, had seen the project and obtained the theatrical rights and he added additional footage in order to bring Dark Star to feature length. 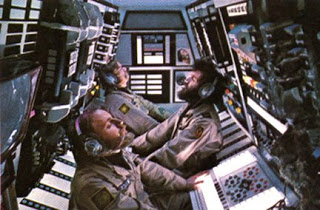 The film begins with an epistolary entry from Earth to the crew of Dark Star. We learn that the crew has been in space for 20 years, their commander has been killed from an on-board accident during hyperdrive and the crew’s request for additional equipment is denied due to budgetary constraints. The crew’s directive is to destroy unstable planets by releasing bombs and then using warp drive to get away from the planet as quickly as possible.

When the crew is not cooped up in their control room, which does have a vague similarity to one of Stanley Kubrick’s 2001: A Space Odyssey sets, they are sitting around in their makeshift bunkroom, bored to tears. Each tries to find some way to pass the time: Boiler (Cal Kuniholm) pulls out a switchblade and I kid you not, he clears space on the table in front of him and he sprays out his hand against the surface and then stabs down at the space between his fingers. Hmmm, where did that get replicated? Doolittle (Brian Narelle) plays a bottle organ that he has constructed while Pinback (O’Bannan) plays sight gags with props, records a video diary, and has an alien (a huge beach ball with claw feet). Talby (Dre Pahich) remains for the majority of the film, in the observation bubble located on top of the ship. And, Commander Powell (Joe Saunders) is held in a cryogenic tank, but can still dole out expert advice when pressed. 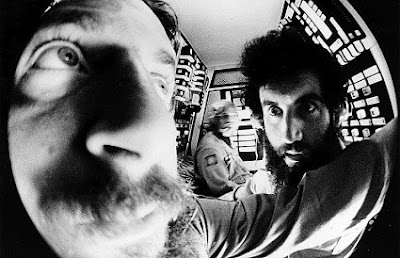 Through a chain reaction of events, Bomb #20 receives some damage. When pressed to engage its release mechanism, it refuses and instead is planning to detonate still attached to the ship. Bomb #20 refuses to listen to Pinback, but Powell advises Doolittle to teach the bomb phenomenology. Teaching the bomb to become sentient works and Bomb #20 returns to the holding bay of the ship. However, Doolittle has taught the bomb to be skeptical of its own beliefs. As a consequence, when Pinback tries to get Bomb #20 to respond, it begins making biblical references and ultimately, comes full circle and brings light into the darkness by exploding. Pinback and Boiler are instantly killed; Doolittle and Talby are sent adrift in opposite directions, each headed to their own destinies.

Although Dark Star is not a space horror in the traditional sense, it is important to consider the film in understanding the career of filmmaker John Carpenter, who went on to make three space horror films and writer Dan O’Bannon who went on to do Alien. There are a couple of other points of interest in this film. For example, although a small aspect at the climatic moments of the film, the idea of a sentient artificial life is intriguing and has been explored previously in 2001: A Space Odyssey and many after it. While satirical, the film does touch on the impact of space exploration and isolation on astronauts. This point has been made in Europa Report for example. 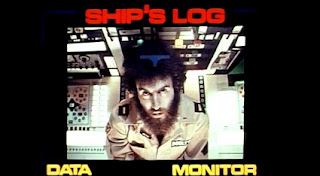 My Blu-ray version also had a supplemental interview with author Alan Dean Foster regarding Dark Star, he mentioned he had to add so much material to the novelization of the film. He padded his story by focusing on character development. When asked about the beach ball alien, he said that he finally had to accept that it was a beach ball. He decided to let readers to fill in the details. He felt it was already funny, so he did not want to add to it. 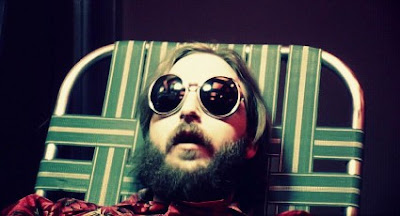 Other supplements included an interview with actor Brian Narelle and documentary on John Carpenter. Sadly, Carpenter himself did not appear in the documentary, but rather a pre-recorded interview that was spliced interviews with other stars and crew from Dark Star.

If you want to be a completionist of Carpenter, O’Bannon and/or watch a space film that touches on space horror concepts, then watch this film. 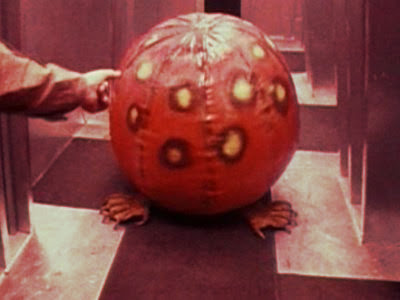